The Toyota 2000 GT (officially named Toyota 2000GT, note the lack of the space; トヨタ・2000GT in Japanese) is a 2-seat sports car produced from 1967 to 1970. Born out of a joint venture between Yamaha and Toyota, the 2000GT was the single car that rewrote how Western car makers thought of Japanese cars. The Toyota 2000GT was Japan's first supercar and the first seriously collectable Japanese car. Only 351 were made, with 60 being exported to the US. the rest being thinly spread across the globe. The 2000GT served as a design inspiration for Nissan when they were designing their Fairlady Z to phase out the Fairlady Roadsters.

The Hot Wheels Toyota 2000 GT was originally slated for the final series of Hot Wheels Racing in 2012, featuring all Japanese race cars, but the series was cancelled before it came to fruition. It debuted in the mainline the following year without being labelled a 'New Model'. The toy number for that unreleased version remains present on this casting, most notably visible on the windshield piece: W8305. 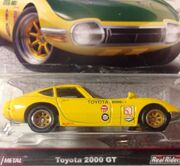