The Toyota 2000 GT (officially named Toyota 2000GT, note the lack of the space; トヨタ 二千GT in Japanese) was a 2-door sports coupe produced by Toyota motor corporation from 1967 to 1970. Designed originally by Yamaha, the Toyota 2000GT was proposed originally to Nissan, whom rejected the offer. Nissan later would use the 2000GT as a design inspiration on it's Fairlady Z (exported as the Datsun 240Z) which replaced the Fairlady Roadster in 1970. 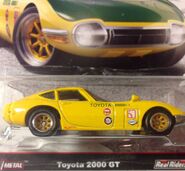