The Toyota Land Cruiser (sometimes written as LandCruiser) is a series of four-wheel drive vehicles produced by Toyota since 1951; the Land Cruiser is Toyota's longest running nameplate, and the second longest in the world behind the Chevrolet Suburban. Originally starting off as a Jeep-style vehicle, the Land Cruiser has since morphed into a full-sized luxury SUV.

The J60 Series Land Cruiser was first introduced in 1980 as a replacement for the old J50-series Land Cruiser; this was the second generation of the comfort-oriented Land Cruiser. The car featured blockier styling and other changes designed for it to better compete with the emerging off-road market. The car was discontinued in 1990, but production continued in Venezuela until 1992, where it was named the Samurai.

The initial livery of this casting is based on that of a 1986 Land Cruiser owned by Japanese Nostalgic Car as their "shop car". The base of the casting reads Toyota Land Cruiser FJ60.

The Toyota Landcruiser FJ60 has come out in the following 1/64 scale versions: 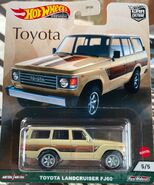