The Toyota Supra is a sports car produced by Toyota since 1978. Its name is derived from the Latin term "Supra", translating to "to go beyond". The fourth generation Supra, colloquially known as the A80 or the Mk4, was designed by Isao Tsuzuki and was largely based on the Toyota Soarer. The car is powered by the 2JZ 3.0L inline-6, available in naturally-aspirated and twin-turbocharged iterations. This generation of Supra had Toyota place more emphasis on a more serious high-powered car. Since its discontinuation in 2002, the A80 Supra has gained a cult following among automotive enthusiasts and the modification scene, especially after its appearances in mass media such as Initial D and the Fast & Furious franchise.

This casting depicts a lightly-modified 1994 Toyota Supra with what appears to be a generic bodykit and hood similar to a Ridox design and a rear wing similar to ones offered by APR Performance. The initial livery of the casting was based on Brian O'Conner's 1994 Toyota Supra from the film The Fast & The Furious; subsequent versions of the Supra depicting Supras from the film series include Orange Julius's Supra in 2 Fast 2 Furious (recycled from Supras from the first movie) and Brian's peronal Supra from Furious 7. This casting is not 100% faithful to the car from any of the movies; the car sports a generic design of body kit as opposed to the Bomex bodykit as featured in the movies.

The Toyota Supra has come out in the following 1/64 scale versions:

as they say, Super Tsunami and Toyota Supra are very similar.

Also in the side Super Tsunami and Toyota Supra are very similar. 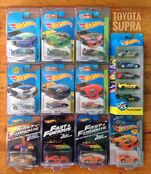 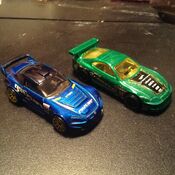 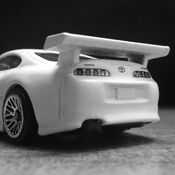