The Troy Soldier is obviously based on the Trojan War, due to its name and design. This casting has had very few releases, only being released once after its debut in 2012.

The Troy Soldier has come out in the following versions: 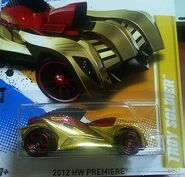 Troy Soldier left side view, showing the left side with stripes instead of HW Logo

Troy Soldier right side view
Add a photo to this gallery
Retrieved from "https://hotwheels.fandom.com/wiki/Troy_Soldier?oldid=348567"
Community content is available under CC-BY-SA unless otherwise noted.