Preston Tucker was a maverick. Immediately following WWII he published the preliminary design for his "car of the Future". By 1947 the Tucker 48 (initally called the Torpedo) was in production, boasting many innovative safety features including seat belts, plus a hugely powerful rear-mounted flat-6 water-cooled engine, a slippery aerodynamic body, rubber suspension and a "Cyclops' Eye" third headlight coupled to the steering linkage. So why were only 51 examples produced before the company folded? Conspiracy theories abound, but you can judge for yourself by watching the 1988 movie "Tucker - The Man and His Dream".

The Tucker Torpedo has come out in the following 1/64 scale versions: 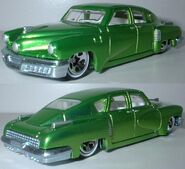 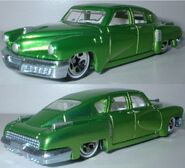 Add a photo to this gallery
Retrieved from "https://hotwheels.fandom.com/wiki/Tucker_Torpedo?oldid=361715"
Community content is available under CC-BY-SA unless otherwise noted.