During the 70's and 80's, Bob Rosas was the Manager of Product Development (Boy Toys) at Mattel and Larry Wood was the principal car designer at Mattel. In 1978 they took interest in the DeLorean car, which was getting significant media attention at the time. Joel Rubenstein, Product Legal at Mattel, received a verbal okay from DeLorean Motor Company to produce a Hot Wheels car based on the prototype DeLorean car. Working from photos of the prototype, the molds were quickly developed and samples created.

For reasons that are still unclear (though a deal with Matchbox has been recently uncovered), DMC decided against allowing Mattel to manufacture the die-cast version of the car. To recoup the costs associated with the design and tooling, Bob convinced Mattel to modify the existing tooling to alter the appearance of the car just enough that it wasn't exactly a DeLorean any more. The version was re-named "Turismo" and sold in 1981. The gallery photos (courtesy Bob Rosas) of the silver car show one of the few surviving prototypes made from the unmodified tooling.

In 2015, Hot Wheels paid tribute to Turismo with two new versions of the current DeLorean cast that replicated the red and yellow #10 paint job. One is gloss red, the other is Spectraflame.

The Turismo has come out in the following versions: 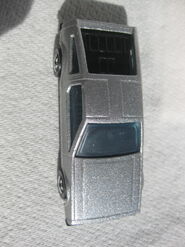