The Twin Mill is arguably the most famous, memorable and popular Hot Wheels car of all time, so much so that Hot Wheels themselves made a real life, full scale fully functioning replica which frequently appears at car shows.

Debuting in 1969, it was designed from the ground up in house at Mattel by Ira Gilford. Its first release was painted in several 'Spectraflame' colors and came with Redline wheels. It was manufactured in the USA and could be found with either a white or dark brown interior. The twin motors have a gold tint. The base can be seen from the top of the car and was painted in body color. It was packaged with a metal "collectors button".

Some early pre-production prototypes have what is known as a 'Cut Fender' where the rear fenders are much smaller and do not cover the rear wheels entirely. This adheres to the original design made by Ira. They are very hard to find and have been found in Antifreeze, Orange, Red, Light 'Apple' Green and Creamy Pink.

1973 saw the Twin Mill released as a Shell Promo, a giveaway promotional car handed out to customers at Shell service stations. As with other 1973 cars, it lost its Spectraflame paint which was replaced with enamel paint.

In 1993, the Twin Mill was revived and re-tooled for the 25th Anniversary series.

In 1998 the Twin Mill was released in the collector-aimed 100% Hot Wheels series and featured a unique and highly detailed casting which included an opening canopy. It was only used twice before being discontinued.

It has led to five other follow-up castings, the Twin Mill II (1993) and Twin Mill III, as well as a Toon Car Casting, Twin Mill Gen-E and a Tooned version.

In 2019, on the 50th birthday of the casting, it got a retool. The base was changed from metal to plastic.

The Twin Mill has been released in the following 1/64 scale versions:

The Twin Mill (Shell Promo) has come out in the following 1/64 scale versions:

Twin Mill has been released in the following versions:

Another sketch powered by ©Bruce Pascal 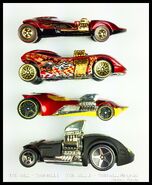 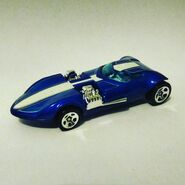 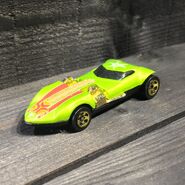