The original Bugatti Type 57C Cabriolet (Chassis #57808), was commissioned by the French Government and especially designed by Vanvooren Coachbuilders as a wedding gift for the Shah of Iran, Mohammed Pahlavi and his wife Princess Fawzia of Egypt in 1939. It came fitted with a 189ci Inline-8 engine which produced 175 horsepower, impressive for the day.

It remained in the Court of Iran until the Iranian Revolution in 1979 where the car was sold cheaply to a buyer in the USA who installed a V8 engine. The car was later sent to London where it received a full restoration and sent back to the USA where it currently resides on display at the Petersen Automotive Museum in Los Angeles, California.

The Hot Wheels debuted in the collector-aimed 100% Line in the Classic Bodies 2-Car Set. I features a removable hood which reveals the Inline-8 engine. It was only used three times before the 100% Line was discontinued.

The Type 57C Bugatti has come out in the following 1:64 scale versions: 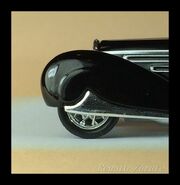 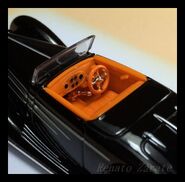 Add a photo to this gallery
Retrieved from "https://hotwheels.fandom.com/wiki/Type_57C_Bugatti_Cabriolet?oldid=293180"
Community content is available under CC-BY-SA unless otherwise noted.