Originated in 1966 by the Sports Car Club of America, it was officially known as the Trans-American Sedan Series, but to the legions of racing fans who loved watching America's most popular drivers behind the wheels of the country's most popular muscle cars, it was simply referred to as 'Trans-Am'.

For the next six years each Trans-Am event would prove to be a battle in the ongoing Pony Car wars. These bumper-bangin' races were held on the country's most challenging road courses such as Sebring and Watkin's Glen, and established the annual Manufacturer's Championship. 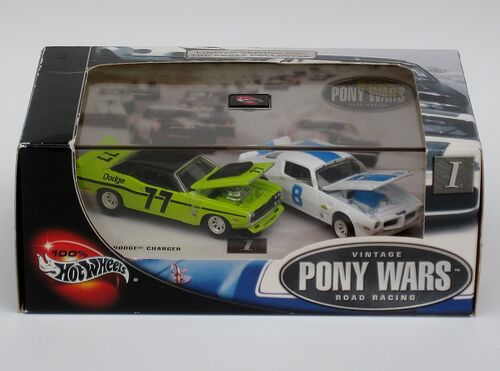 The following vehicles were included in the Vintage Pony Wars Road Racing I 2-Car Set:

Set I Box Rear
Add a photo to this gallery
Retrieved from "https://hotwheels.fandom.com/wiki/Vintage_Pony_Wars_Road_Racing_2-Car_Sets?oldid=344303"
Community content is available under CC-BY-SA unless otherwise noted.