The VW Brasilia is a reproduction of a compact Brazilian car with the same name (named after Brazil's capital city). The real model was produced from 1973 to 1982 by Volkswagen Brazil, and was one of the first Volkswagens to be designed outside of Germany.

The Brasilia looked like a smaller version of the Volkswagen 412 Variant, but was in fact based on the Volkswagen Beetle. It was developed by Volkswagen do Brasil ('Volkswagen of Brazil'), which had at the time a unique and somewhat exotic line of cars, which spawned such rarities as the SP2. The Brasilia was equipped with the Volkswagen air-cooled engine from the Beetle.

The Hot Wheels version has a non-stock front bumper, removed back bumper, racing seat and a roll cage. The miniature is a reproduction of the first generation Brasilia (1972-1977).

The Volkswagen Brasilia has come out in the following 1/64ish scale versions: 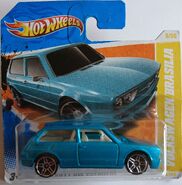 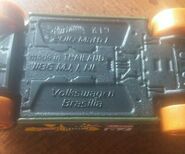