The Volkswagen Käfer Racer (with "Käfer" pronounced as "Kaefer", meaning 'beetle' in German) is a Hot Wheels original model that is based on a Volkswagen Beetle, and was designed by Mark Jones. His objective was "to find the ultimate, crazy racing VW", but one that Volkswagen would agree to because of licensing. Jones took a Custom Beetle and added some parts to the underside and the back. The Käfer Racer appears to have taken inspiration from a VW Beetle Super Saloon and VWs racing in the Fun Cup. The first release was inspired by the Momo-sponsored Porsche 935/78-81 'Moby Dick' raced by Gianpiero Moretti in the IMSA GT series in the early 1980s. The car has downforce tunnels on the underside of the Beetle, a V8 engine with two exhaust pipes sticking out, and an air scoop on the roof.

The Volkswagen Käfer Racer has come out in the following 1/64 scale versions: 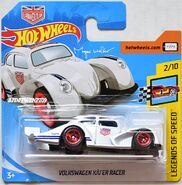 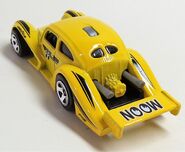 Retrieved from "https://hotwheels.fandom.com/wiki/Volkswagen_K%C3%A4fer_Racer?oldid=338880"
Community content is available under CC-BY-SA unless otherwise noted.