The Winged Express was a 'Fuel Altered' drag car raced by 'Wild Willie' Borsch and Al Marcellus in the 1960's. 'Wild Willie' was famous for driving the car with his only his left hand with his other arm resting on the side of the car, sometimes mistaken for showboating it was actually to stop his body from sliding around. The name 'Winged Express' comes from the enormous wing attached to the car, which was actually one of the first wings ever on a drag car. Two 'Winged Express' were made after a crash in Michigan in 1970 destroyed the first car. The original car had a 94-inch wheelbase, while the second revised design was extended to 100 inches. Willie and Al won the Winternationals in the AA/FA class in both 1967 and 1968. The Winged Express' career best run was 6.96 @213mp/h. Willie Borsch was inducted into the Drag Racing Hall of Fame in 1992, one year after his passing.

The Hot Wheels version of the Winged Express was only released once, in the 2002 Fuel Altereds Vintage Drag 2-Car Set with the Pure Hell.

The Winged Express has come out in the following 1/64 scale versions: 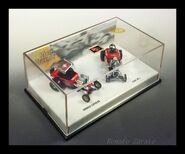 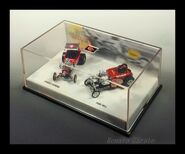 Add a photo to this gallery
Retrieved from "https://hotwheels.fandom.com/wiki/Winged_Express?oldid=303073"
Community content is available under CC-BY-SA unless otherwise noted.