In 1974 Mattel continued with enamel paints but introduced them with tampos, calling the series Flying Colors. The Winnipeg is a recoloring of the Chaparral 2G.

It was painted in yellow enamel with blue and orange tampos.  The plastic spoiler was recreated in orange to match the color scheme of the car.  Original Winnipeg spoilers are scarce and reproductions abound.  As with most Flying Colors cars, the Winnipeg usually has non-removable straight-axle wheels (like in the main photo).  However, a few Winnipegs have been found with cap style wheels.

The Winnipeg was released only in 1974.

The Winnipeg has come out in the following 1/64 scale versions:

Winnipeg in blisterpack, with straight-axle wheels. 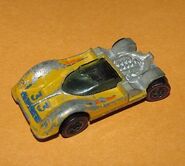