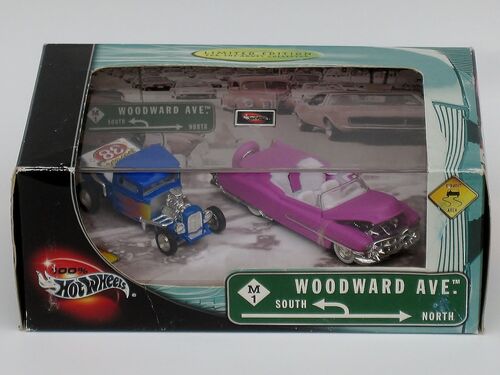 Detroit's Woodward Avenue has been a mecca for Motor City cruisin' for five decades. In the '50's it was a few lowered cars with whitewall tires, skirts and spinners - nowadays it's the site of an annual reunion that attracts rod and custom car enthusiasts from across the country. But it was during the mid '60's when Woodward's repuation grew to legendary status. The car culture changed from 'Low and Slow' to 'Fast Forward'. With the sounds of Motwon music blaring from car radios, early muscle machines mingled with the city's hottest rods and coolect customs in a nightly ritual of cruisin' to the north end of Woodward. There, Ted's Drive-In offered hot burgers, cool waitresses and the chance for engine revvin', clutch poppin', tire screechin', and stoplight-to-stoplight street racin'. Those were 'the days' and Hot Wheels Woodward Avenue 2-Car Set can take you back there.

The following vehicles were included in the Woodward Ave. 2-Car Set:

Rear of box
Add a photo to this gallery
Retrieved from "https://hotwheels.fandom.com/wiki/Woodward_Ave._2-Car_Set?oldid=344306"
Community content is available under CC-BY-SA unless otherwise noted.