The Incom T-65 X-wing Fighter was the primary all-purpose starfighter of the Rebel Alliance and its successor governments. Known for its versatility and exceptional combat performance, it was a favorite with Rebel and New Republic pilots. Possessing deflector shields, a hyperdrive, an R2 astromech for repairs and navigation, and a complement of proton torpedoes, the X-wing allowed the Rebellion to launch raids in Imperial space with improved odds of a successful mission.

For the launch of Star Wars Carships, Hot Wheels decided to built a 1:1 scale X-wing Fighter carship. This car was for display at the San Diego Comic-Con and Hot Wheels even allowed a select few to sit inside.

The X-Wing Fighter has come out in the following 1/64 scale versions:

The 1:1 scale X-wing Fighter being built.

The Fighter being built, side view. 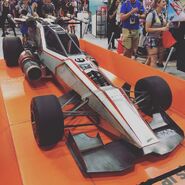 Top view of the X-wing Fighter.

Side view of the X-wing at San Diego Comic Con.

The X-wing Fighter at the Hot Wheels Headquarters. 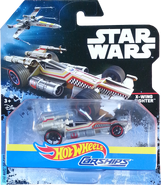 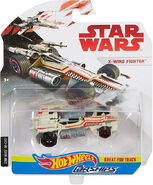 Retrieved from "https://hotwheels.fandom.com/wiki/X-wing_Fighter?oldid=412089"
Community content is available under CC-BY-SA unless otherwise noted.