A Zombie is a common, undead hostile mob (from mobile) that comes in many variants. They appear in the video game Minecraft. Zombies will attempt to avoid obstacles, including sheer cliffs and lava, and will try to find the shortest path towards the player. Unlike Skeleton zombies do not try to avoid being hit and continue to pursue the player even when being attacked.

The Hot Wheels version of this "mob" is modeled after a station car, sharing appearance with the Cruise Bruiser. Its body consists, cleverly, out of two colors, making it easier to give the model multiple colors. Two exhausts poke through the hood.

The Zombie has come out in the following 1/64 scale versions: 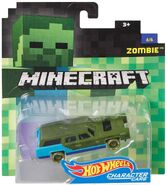 Zombie rear view.
Add a photo to this gallery
Retrieved from "https://hotwheels.fandom.com/wiki/Zombie_(Character_Car)?oldid=376140"
Community content is available under CC-BY-SA unless otherwise noted.